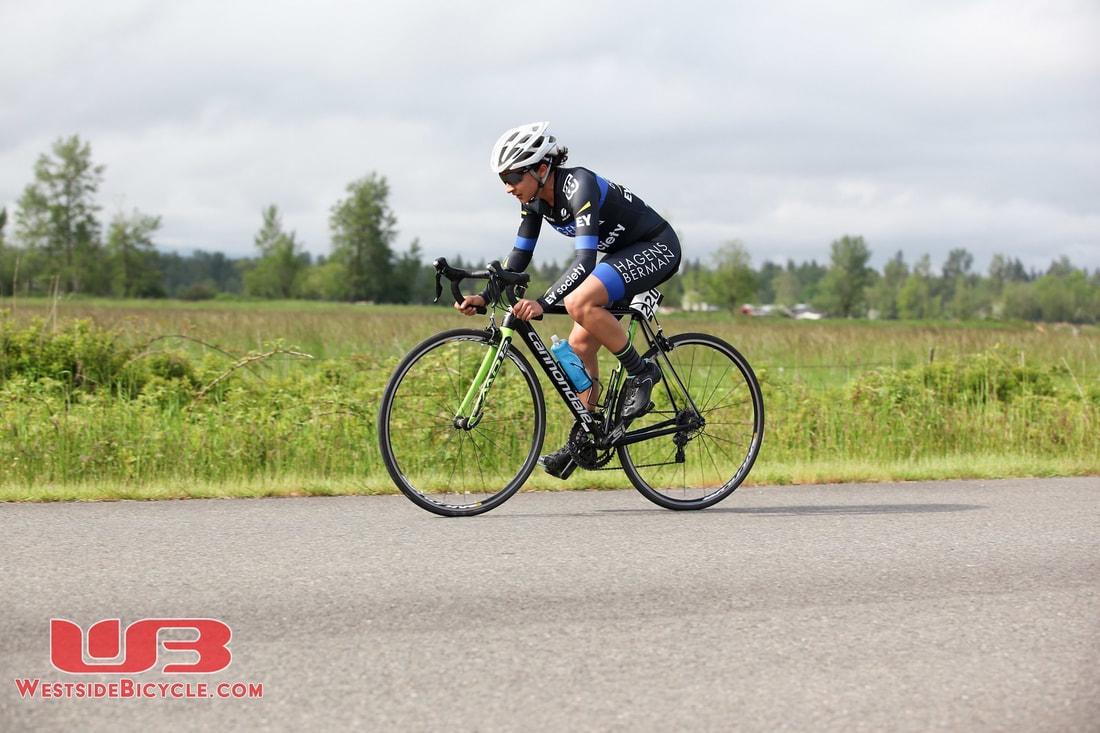 ​Finding a way to continue racing bikes after college can be confusing, but it is possible! You find yourself asking questions like: “do I need to be super serious about the sport?”, “do I have to be ‘chosen’ or ‘good enough’?”, “how do I find a team to race for, or do I even need a team at all?”, “will it be the same as it was in college?”. The answers to all the questions vary from person to person. I have seen the women I raced with in college continue racing in so many ways. Every racer’s journey is different. After racing the 2017 collegiate season, NWCCC Alumni Rachel Thody had to say goodbye to collegiate cycling, but for her that did not mean saying goodbye to racing. That summer she joined the Seattle based team Hagens Berman to continue her racing journey. In this interview, Rachel tells us how she did it.

How did you get into riding/racing bikes?
Living in Wenatchee, I watched Tour de Bloom every spring and I was really interested, but there weren’t any opportunities for a 9 year old girl to join a bike team and race. Then I started riding mountain bikes when I was in high school. I would borrow my brother’s old 2004 Specialized Enduro (too big for me and the breaks didn’t really work), go out in the Wenatchee and Leavenworth trails alone or with my dog, and I loved every moment of it. When I went to WWU, armed with my own bike, I wanted to join the mtb team to race cross country or enduro, but only the road team had a racing structure. I joined that team, and just took off from there. The team was strong and supportive and race weekends were the highlight of my year. I’m still looking to race mtb when the opportunity comes around, but for now, I’m as happy as can be on my beloved road bike.

What is your favorite memory from racing in the NWCCC?
Oh man, there are too many. The carpooling was fun, I got to know my close friends though being stuck in a car together for hours and hours. Cooking (they always kicked me out of the kitchen because I can’t so much as scramble eggs or stir oatmeal without making a mess or burning stuff) and eating meals together like a chaotic family. Reuniting with friends from other schools every weekend. Off the top of my head, I remember Kate Berreman and I sprawled in the back of a rental minivan on a sunny day, eating everything possible since we had just finished our crit at Whitman. Still half-dressed in sweaty kit, cheering on our teammates from our spot, and feeling really content. My legs were tingly from the lactic acid burn, but it wasn’t anything leftover birthday cake and cold coffee couldn’t fix.

Which NWCCC race is your favorite and why?
Criteriums are my favorite, I liked the location of Western’s home crit. Being in town feels like a real crit, lots of spectators, and it was a 26 second walk from Café Velo who gave us doughnuts. UW’s road race this year was really nice, I remember enjoying the scenery and the hills weren’t so bad. 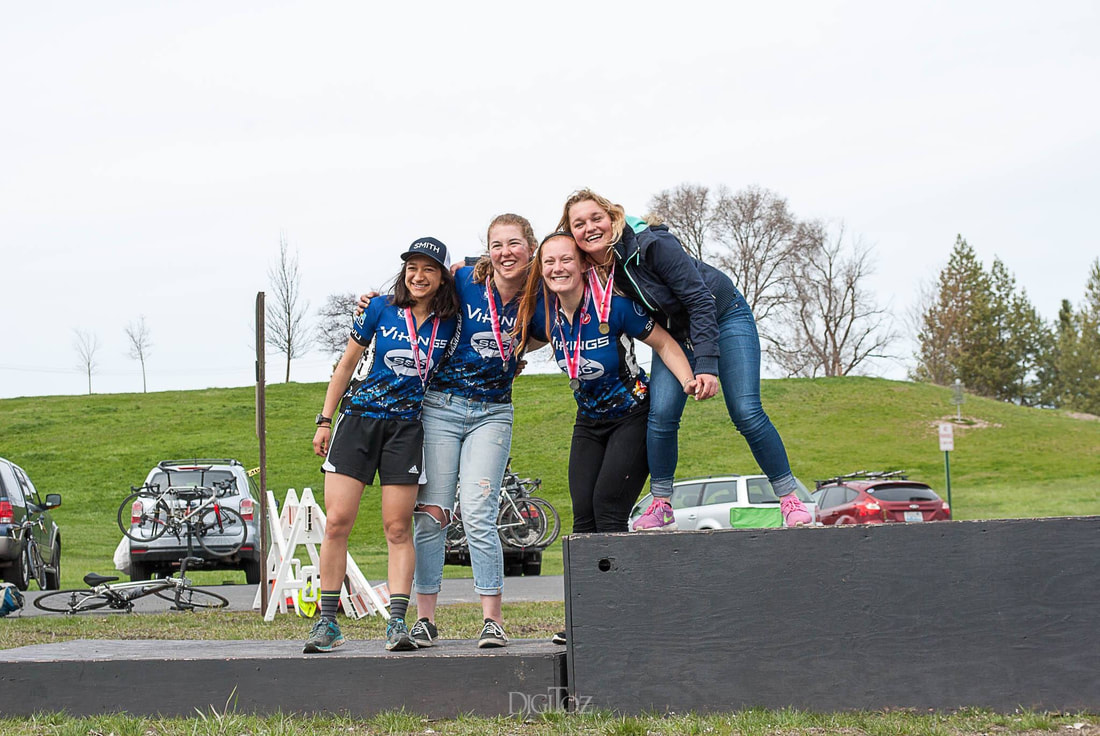 Outside of collegiate racing, you race for Hagens Berman EY. What led you to start amateur racing?
After my first race weekend with Western, I was hooked and thought to myself “Yeah, this something I want to do for a very long time, and I want to see how far I can go”. The collegiate scene is awesome in so many ways, and racing amateur is similar but provides the opportunity to be more competitive and go further. I’m racing against people who are way more experienced and seasoned which makes it that much more challenging. The collegiate season is so short; being part of an amateur team extended my season and keeps me busy throughout the year.

Finding an amateur race team can be difficult and overwhelming since there can be so many different types of teams to choose from! How did you find your team?
I started by doing research like any good student, through Google, and then the WSBA website, and talked to people at bike shops and my own teammates. It’s about filtering all the teams to what you want. Some are just men’s teams, some are just for Cat 1-2 and 3, some are more competitive than others, etc. I went to the ‘Meet the Team Ride’ in Seattle, early October, where all the teams rode together. It was great, everyone was excited to meet the new people and tell you a bit about their team dynamic. I chose Hagens Berman EY because a couple people I know raced for them when they were in college and said good things about it. Also, I joined when I was 20, making me the youngest rider in any team by almost 10 years, but Hagens Berman EY had a few people that were in their mid-20’s. I wanted to have teammates to race with that were around my same physical level and experience, so that was a deciding factor. Hopefully more people join different teams so age-factor won’t be an influence in choosing a good team.

How was the transition from collegiate racing to amateur racing?
Not bad at all. I missed being surrounded be my friends from college that I’ve known for two years, but everyone at HBEY was welcoming and really nice. The mentality is a little different. Both collegiate and amateur racing has a mix of people doing it for fun and for intense competition. Collegiate is more goofy, I have lots of memories of laughing so much at race weekends because everyone is messing around, pulling pranks, some not taking their racing seriously at all, and lots of heckling. Amateur is still entertaining, but people chose to join committed teams for the sake of racing so it is mostly about the race. It is the same kind fun, people are yelling at their friends from other teams, joking about how ‘aero’ their bike set-up is, post-race dinners and drinks to celebrate just being out there. Race-wise, there is more structure and formality in racing amateur. Teams have enough riders in each category to make tactics happen and everyone is experienced and knows how to ride together as a whole.
​
What advice would you give a collegiate racer thinking about trying amateur racing?
If you like racing even just a bit, then I highly recommend signing up. You can take it as far as you want. You can sandbag as a cat 4 your whole life, or you can use it as a steppingstone before going pro. Just find a team that suites you and you’ll surround yourself with teammates that have similar goals. It’s also a good opportunity to try other disciplines of cycling like track, mountain bike, and cyclocross. 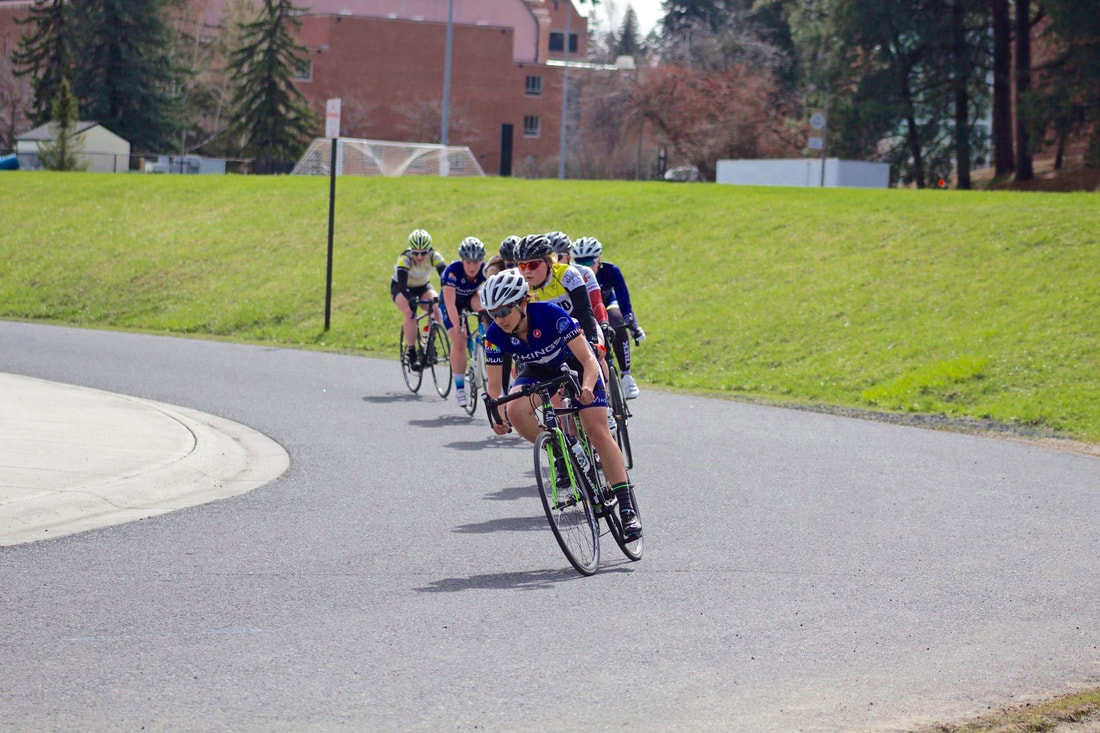 Why do you race bikes?
In every sport I’ve done, love everything about racing: the rigors of training, the ups and downs of performances, recovering and reflecting, seeing progress, and suffering bad in the middle of a race. During my time as a runner, I assumed that was my sport, but it was missing something I couldn’t identify. When I started racing bikes, I realized running was missing the thrill and physical demand you can only find on two wheels. Chasing or initiating a breakaway, racing distances of 40 miles or more, getting out of the saddle on a climb when I really don’t want to, hurdling down descents a little too fast, the final 200meter sprint when tunnel vision kicks in and all I see is the finish line, I could go on and on. Landing on the podium is awesome too, but it’s how I feel during the race that draws me to it (which is weird because during a race I’m tired, hungry, and muscles are aching, that doesn’t sound like a lot of fun but it is). Sometimes it’s difficult to keep myself accountable in training since I am burned out from school, working, studying, and mental hurdles, but if I’m not doing it then I don’t feel right. So long as I’m pushing myself a little further every training session, driving my physical capacities to their max in every race, and getting stronger, I’m doing what I love.

What does women’s racing mean to you?
To me, it means being an athlete and being a woman. It’s not an unusual concept or an unfamiliar role for a woman to fill. It means being an athlete, plain and simple as that. Putting in the time, clocking in the pain points, going out there alone or with a team, and living in the pain cave during a race. That kind of work isn’t particular to being a woman, its universal in anyone willing to train and test their physical abilities. Women’s racing is just a category so we don’t get scored men’s, but it doesn’t make our passion for the sport, the training, or race efforts any different. It shouldn’t mean courses become drastically altered, and less credit given to a women’s team despite the same amount of work and dedication put into a race as the guys.

Final question: Favorite on-the-bike food?
Any type of energy chew. The more caffeine, sugar, and electrolytes the better, it goes right into the bloodstream and has saved me from bonking. 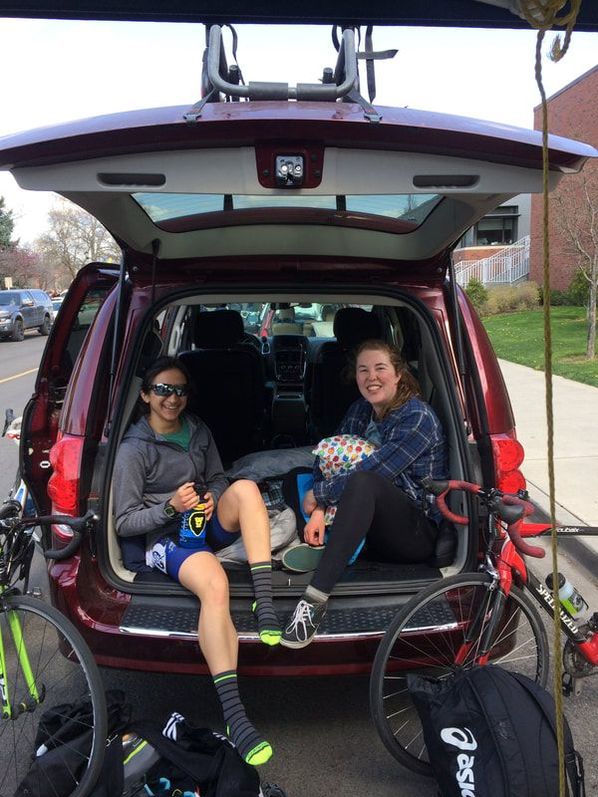 ​Thank you Rachel for sharing!